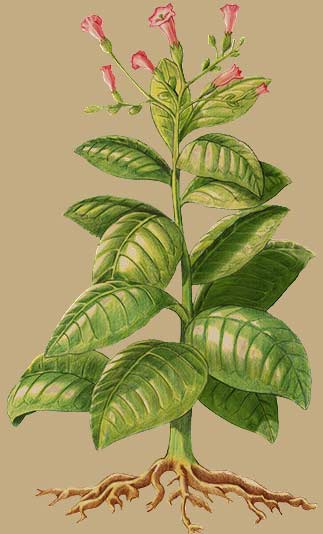 Sayri is the name given by the Aymaras to the tobacco spirit.

Traditionally, it has been used in America long before it received the name of Nicotiana. Indigenous communities call it with different names and use it from the jungles to the mountain chains of the American continent.

“In order to determine the geographic origin of the Nicotiana, it is a significant fact that there is a direct relationship between the Petunioides from South America and the ones from the Australia-Pacific region. Nevertheless, the subspecies from North America, which are also closely related to the South American species, are related only through them with the Australian and Pacific species”. This distribution “points to South America as the center of the current Nicotiana distribution and, combined with other relevant data, suggests that the species origin is in that continent with the subsequent spread into North America, Australia and the South Pacific region”[1] and, we must add, into Africa[2]. It seems that the origin of many South American Nicotianas resides in the de Andean region. The distribution area includes the Andean massif in the south of Ecuador, Peru, the west of central Bolivia and the north of Chile.[3]

In Abya Yala, Sayri was the name given to the tobacco plant spirit by the Aymaras, an ancient community from the Andes, who support us and share their knowledge with us. In this sense, Sayri Tabacos thanks the resistance of these communities to losing their orally transmitted wisdom, often while sharing a tabaquito. We, the new generations of all the races, listen to the wisdom of the elderly, respect their ancient ways and accept with gratitude their teachings.

So, we particularly wish to recover and strengthen the traditional use of tobacco. Tobacco is considered the master plant used for smoking, chewing, inhaling as powder, making infusions or decoctions; it is used topically on the skin, and predominantly in ceremonies.